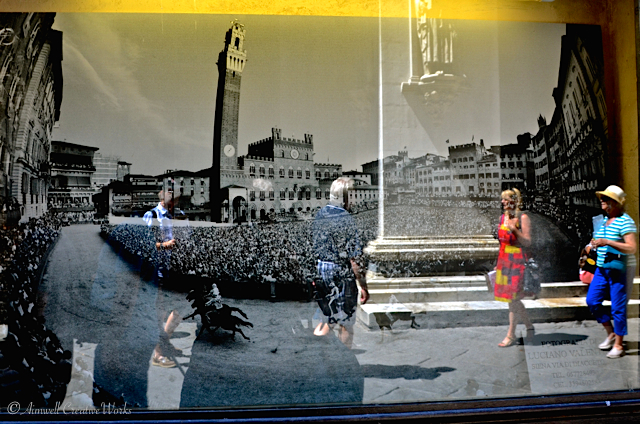 Today’s image is of an old image of race day on display in one of the streets of the town. Superimposed are some friends trying to decide how to get to the restaurant we’d decided on for lunch. We ended up taking a rather convoluted route up and down some steep hills almost coming full circle from where we started to reach Enotica I Terzi ~ an off-the-beaten-track gem … with air conditioning!!!

The food was so delicious no one spoke for as long as it took us to eat. That is except for the frequent “mmmmms” and “ahhhhhhs” and “wows!” that reverberated around the private room we’d been allotted. Somehow the food in Italy is that much more delectable than anywhere else. Perhaps its due to the fact they don’t use GMO produce.

After a further wander around the town, including three intrepid members of our party climbing the 500+ steps of the Torre del Mangia, (and another stop for gelato) we high-tailed it back to the villa for a refreshing swim.

Thanks for indulging my trip down memory lane,