An itchy spot under that thick winter coat.

Nothing a delightful little roll in the arena footing can’t remedy.

While my horse, Bear, is in rehab due to an injured lateral suspensory ligament, a lucky charm has taken up residence in his bridle.

An expression of my inner child, this little horse puppet’s name just happens to be Lucky.

On a serene hill near Iano in Tuscany sits a beautiful villa with views for miles around.

In the early morning gentle mists shroud the valleys as light bursts upon the hills.

And in the evening, the sun descends beyond a serene Tuscan silhouette bringing the day to rest.

It’s been six months since our stay at beautiful Colle Sereno.

I could use a little serenity … now. 😉 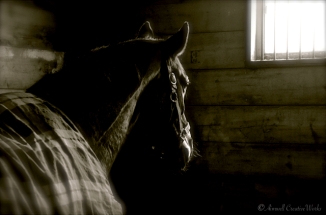 Yesterday afternoon, following a treatment of shockwave therapy to Bear’s recently injured right hind lateral suspensory ligament (in human terms a badly sprained ankle), I found him standing quietly facing the back of his stall. The light from the window reflected so perfectly on his noble face, and the shadowing was so beautifully dramatic, that I grabbed my Nikon D70, which I’ll be using a lot over the next four months while I document his recovery, and captured this moment of serenity. I did so carefully so as not to disturb his quiet reverie.

The vet diagnosed his injury by ultrasound earlier this week and, needless to say, it’s taken a few days for me to find my equilibrium after such terrible news. This is serious requiring 24/7 stall rest, twice-daily hand walking and daily bandaging. I want to give him every opportunity to fully recover so will do everything I can to help make him comfortable and keep him amused. Fortunately he is in the care of a knowledgeable and enlightened horse woman, so I know he will be getting the best of care. This makes all the difference to my peace of mind on the matter.

So, for the winter months Bear and I are truly dormant.

Still, this quietude gives us lots of time to contemplate the next leg of our journey, and as long as we keep looking toward the light this shadow we are living under cannot last forever. 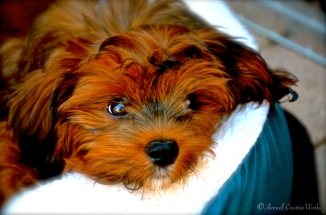 There’s all kind of experimentation in the dog breeding world, and while I am not a big fan of this practice I will say that I am partial to this little guy.

This cutie pie was new to my brother two and a half years ago and gave him a whole new lease on life, for which I’ll always be grateful. 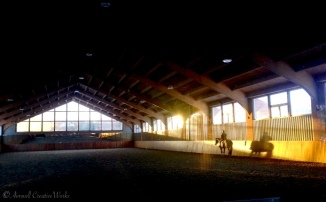 The golden light of a winter sunset cascades into the riding arena.

After the storm a sunset of promise.

Thank you for visiting … 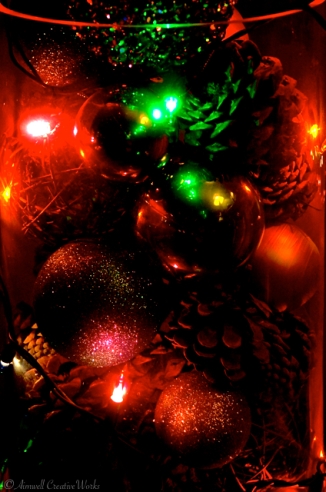 I love a little twinkle. 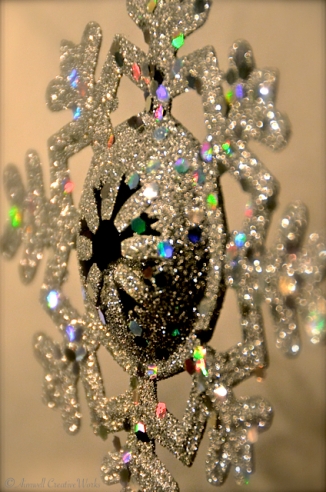 Toys with my imagination. Delights the soul.

And then there are ice storms. Not so pleasant to experience.

But awfully pretty to behold.

The last two images captured after last year’s ice storm and taken from the safety of the house. 😉

His name was Oskar, but I frequently called him “Mr. Wabbit” … because he was such a “wascal.”

My mother gave him to me as a birthday present in 1994 … the year my grandmother passed away. That period of time marked a major turning point in my life in so many ways, and this little guy rode the waves of change with me.

He was there when I quit corporate to follow my dream.

He, and his lovely Princess, a little black cat I rescued, was there when my first marriage dissolved soon thereafter and I became a nomad, moving five times in three years.

He was around when I met my second husband. (He promptly fell in love with him … animals know the good ones … it was a sign ;-)).

He was my buddy through thick and thin ~ a source of comfort and laughter and joy.

He was a snuggler … with me; with the bears. He liked to talk. He was a good listener. And he took good care of his Princess.

Oskar was an outdoor cat (that is to say, he was allowed outside) and always came home when I whistled the tune, “To dream the impossible dream …”

He had purr-sonality plus. He liked to be the centre of attention when we had visitors, loved to play with the dogs or curl up with them on the couch.

He lived to the ripe old age of 17 when, sadly, he succumbed to cancer.

I will always remember my Wascally Wabbit.

The opera house ~ on the stage and in the hallways echo the dramas of life and vision and creativity.

The Sydney Opera House immediately comes to mind as a place of great theatrical drama, spectacularly reflected in all its dramatic, angular, architectural glory.

One little story … the tour guide told us that when the great (and superstitious) tenor, Luciano Pavarotti, sang at the opera house in 1983 he could not be persuaded to walk on the purple carpet because it was the same colour as coffin lining.

That, my friends, is a dramatic angle …

Abbey and her eight healthy puppies.

Every one a miraculous achievement.

And she a devoted mother to this adorable mass of furry puppy-ness.